LabVIEW™, a National Instruments software development tool, is widely used to create software applications that monitor and control a variety of sensors and control devices. It is very common to find a laboratory, university, or a pilot manufacturing plant using one of these applications to interface with mass flow devices. LabVIEW™ software can interface with a Brooks Instrument mass flow device through different forms of data acquisition. The most popular forms of data acquisition used with Brooks Instrument mass flow devices are described below. 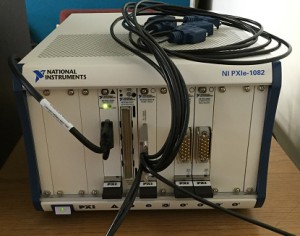 The chances are good that LabVIEW™ software users have analog to digital I/O cards, and can run their MFCs utilizing the 0-5 volt or 4-20 mA analog signaling via LabVIEW™. This is recommended for anyone who may not be ready to move to direct digital control.

GF40, GF80 and SLA devices configured for DeviceNet digital communications can also be controlled via the LabVIEW™ application. Note that this requires a National Instruments DeviceNet interface card and associated drivers and software, which provide support for developing application interfaces using LabVIEW™ software for Windows and LabVIEW™ Real-Time. The following is taken from the National Instruments website: National Instruments DeviceNet for Control interfaces are for applications that manage and control other DeviceNet devices on the network. These interfaces, offered in one-port versions for PCI and PXI, provide full master (scanner) functionality to DeviceNet networks. All NI DeviceNet interfaces include the NI-Industrial Communications for DeviceNet driver software, which features easy access to device data and streamlined explicit messaging. Use a real-time controller such as PXI and NI industrial controllers to create deterministic control applications with the NI LabVIEW Real-Time Module.

So, don't be afraid to go digital. The digital aspect of our mass flow devices include many on-board functions that work in the background and make the device superior even if the final flow signal is sent via analog signal (0-5 Vdc or 4-20 mA).

Nigel is the regional sales manager for the Southeastern part of the U.S. at Brooks Instrument.