In this blog post, we will explore the architecture and performance characteristics of the EtherCAT® protocol.

In many advanced manufacturing applications, there is a growing demand for the kind of high-speed, flexible machine communications supplied by Ethernet-based bus architectures.

Mass flow controller (MFC) technology can make sophisticated use of these capabilities. Protocols such as EtherCAT® offer the opportunity to enhance how critical MFC diagnostic and performance information is shared with, and used by, higher-level machine control systems. These are key reasons why Brooks Instrument introduced the EtherCAT® interface on its GF40 Series and SLA Series, and the semiconductor implementation on its GF100 Series product platform.

EtherCAT® uses a master/slave architecture as well as a processing “on the fly” principle to ensure real-time capabilities without delays. The EtherCAT® master sends a telegram that passes through each node as it moves downstream. Each slave device reads the data “on the fly” and adds its data to the frame. This unique technology allows a slave node to receive and forward an EtherCAT® message before the node processes the data, which means the information can be spread at a much faster pace, reducing response time. Once the last node detects an open port, the message gets sent back to the master.

By connecting the last node in the series back to an Ethernet port in the master device, this line topology configuration can be converted to a ring topology. The ring topology enables redundancy, ensuring that if there is a malfunction in the system, such as a broken cable, up-time is maximized and communication continues. This can be critical in systems with short cycle times so that processes can continue to run smoothly with minimal interruption.

Each slave device reads the data "on the fly" and adds its data to the frame. 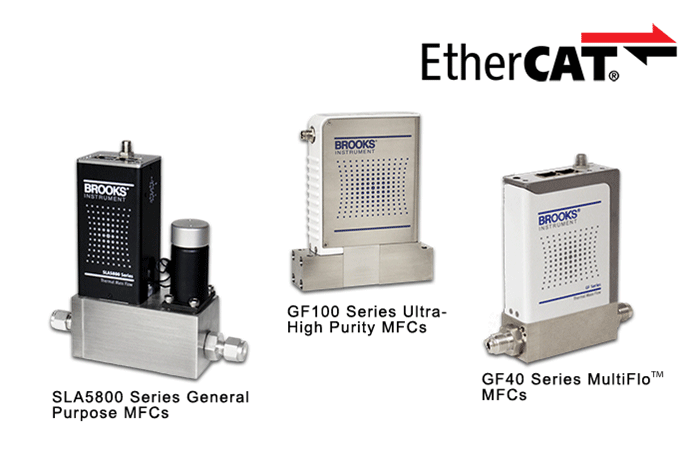 The Brooks GF40 Series, SLA Series and GF100 Series MFCs with EtherCAT® defines a default PDO mapping for each device profile that the user can select, or a flexible PDO mapping which can be configured with up to 10 objects that must have the appropriate PDO access permission. Examples of PDO objects that can be mapped include active exception status, as well as flow, pressure and temperature readings.

Mapping an object requires the user to specify the object’s index, sub index, and size in bits in the PDO Mapping object. Objects with a data type that is not a multiple of 8 bits may require that a “pad” object be included so that the next object starts on an 8-bit boundary. It is best practice to group objects that are not a multiple of 8 bits so that only one “pad” is required, as the “pad” object counts as one of the 10 objects that can be configured. Configuring and assigning a flexible PDO allows for less network traffic and a more simplified system, eliminating metrics that are not applicable for a given application and allowing the user to focus only on the most crucial system attributes.